Tony Bourdain's show on Uruguay aired this week. Here's a Travel Channel video showing him eat carne with his brother in the Mercado del Puerto. 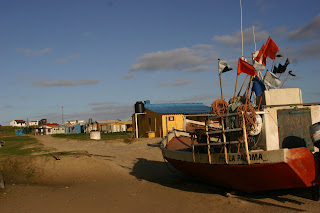 We had a really nice time visiting Cabo Polonio, a beach settlement about 4 hours from Montevideo. In some ways, it´s similar to Punta del Diablo. Cabo Polonio is harder to reach since there´s no road access. You can reach it by 4-wheel drive truck or horseback from Ruta 10.

This is very much the off-season, so we needed reservations to ensure someone would open the hotel. We were the only tourists in the entire town. In the high season (January) every room in every building is filled with artists, hippies, and miscellaneous visitors. Most of the casitas are very small-- merely beach shacks. A few are more substantial. We stayed at La Perla del Cabo, the nicest place in town. (Although it was still very simple-- 2 hours of electricty daily, hot water some days but none while we were there, and for winter a propane heater in the hallway and extra blankets for the beds.)

The town itself was very quiet. All the little souvenir stands, shops and boliches were closed for the season. One almacen offered snacks, fruit, and staples like dulce de leche. The restaurant attached to the hotel opened for us. Their fresh fish was great.

We climbed the lighthouse, which gave great views of the coast. On the rocky point beneath the faro, hundreds of sea lions bathed in the winter sun. We saw a lone penguin, apparently off-course from its annual migration to Brazil from southern Argentina. It´s whale season, but we didn´t happen to see any.

It´s been very comfortable returning to Montevideo and we´ve been busy visiting friends, watching soccer, going to shows, and eating great food. Too busy to write any blog posts, until now.

Not much has changed in the city. A few businesses have closed and a few new ones opened. Some of the same graffiti is still on the walls.

One noticeable change: the depreciation of the dollar makes everything more expensive. For example, I bought 2 tickets for the new Batman movie yesterday for 180 pesos, or $10 US. That´s the same price I paid for 2 tickets in Kalamazoo, earlier this month. In economic theory, purchasing power parity predicts this; in equilibrium, prices for traded goods should become equal. In this case, I´d guess it´s probably just coincidence.

We're returning to Uruguay this week for a short vacation. I'm looking forward to all the good food including: chivitos, parrilla (at La Otra and the Mercado del Puerto), empanadas, churros, masas finas, and a simple pizza and beer. I'm sure we won't get to do everything on the "official" list of visitors' activities but I hope we have a chance to do some of them. We just missed el clasico, but we watched it on TV yesterday. If Copa Airlines gets us to Montevideo on time, we'll see a show at the Teatro Solis. Most of all, I'm looking forward to seeing many of my friends in Uruguay.

And I'll have some fresh material to add to this blog, as well.